Patiala, located across from The Dubai Mall in Souk Al Bahr, is a must-try place if you like Indian food. Or if you like food. Period. All of their dishes have so much flavor and they are so innovative!

We went there for an early lunch on a Sunday, so the restaurant was a bit quiet, which was all the more better for us. I was with my friend and my baby Khalifa. We initially sat in the main dining area, but Khalifa kept wanting to run around, so we ended up sitting in one of their private dining rooms. The wait staff handed us the menus and asked what we we would like to drink.

After ordering mocktails, the waiter brought us some crispy papadam with a couple of sauces.

We flipped through the menu, but then the restaurant’s famous chef, Chef Kunal Kapur came to our table and introduced himself. He asked us if we knew what we wanted from the menu, or if we wanted to try some of his specialties. He even asked what Khalifa would like to eat, and of course, I had to say chicken and fries on Khalifa’s behalf. My friend and I opted to let Chef Kunal choose our dishes, and after seeing if we had any objections to any kind of food (which we don’t– as long as there’s no alcohol or pork), he headed to the kitchen to whip up some of his most popular choices. He’s such a great character; so humble and kind!

Within just a few minutes, two plates of Scallops with Mint and Pea Puree came. The scallop was slightly seared and next to it was a refreshing and foamy puree of peas and mint. The puree and the scallop were laid on top of a chutney spread that had an ever-so-slight taste of orange rind in it. Scattered on top of the dish was a Indian-style licorice called ampapad, which the chef later explained,was a common childhood favorite in India. The flavors of the dish, although may not sound like they have anything to do with each other, actually came together so well!

When we were done with that, two more dishes came to our table– the Malai Prawn. This was one of my favorites throughout the lunch. The prawn was perfectly cooked and tender and the sauce was creamy.

Soon, Khalifa’s dish of Malai Chicken with french fries came to the table.  My friend and I and I couldn’t help but try it, and it tasted just as delicious as it looked.

The chicken was cooked in a tandoor oven, which gave it a beautiful smokey flavor, while still retaining a good amount of moisture. Khalifa definitely loved it! Heck, I would have happily had it as my main course as well!

For my friend and I, a dish of Chilean Seabass with Strawberry Chutney arrived at the table. Chef Kunal explained that the fish had absolutely no seasoning and all of the flavor comes directly from the chutney!

Once that plate was cleared, we were presented with a Dorra Kabab, which is something I have never seen before. From the way that it looks, it seems like a simple kabab, but its so much more! The chef told us that “dorra” means “string”, and flavored string is delicately rolled on the kabab rod.

The preparation for this kind of kabab takes special skills because if the kabab is even the slightest bit overdone, the string could disintegrate and make the whole dish go bad. The kabab is taken off of the rod by a tug at the string– which explains the slit on it. The meat just melts in your mouth, and the flavor has a slight hint of heat.

After that came a Dahika Kabab, which was a labneh-like yogurt thats deep-fried. It has a bit of a sour taste and this was one of my friend’s favorites. 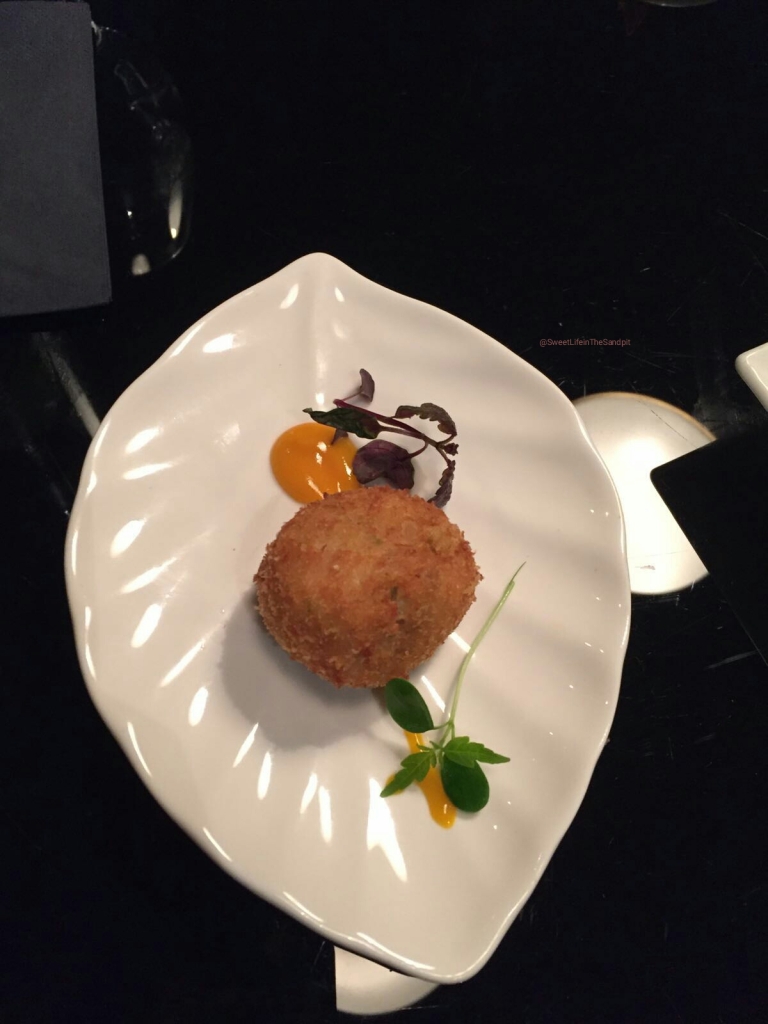 Soon came a Eggplant Steak, which was deep fried and topped with a chutney sauce. I love eggplant and what could be better than something thats fried?! It was a sure hit. 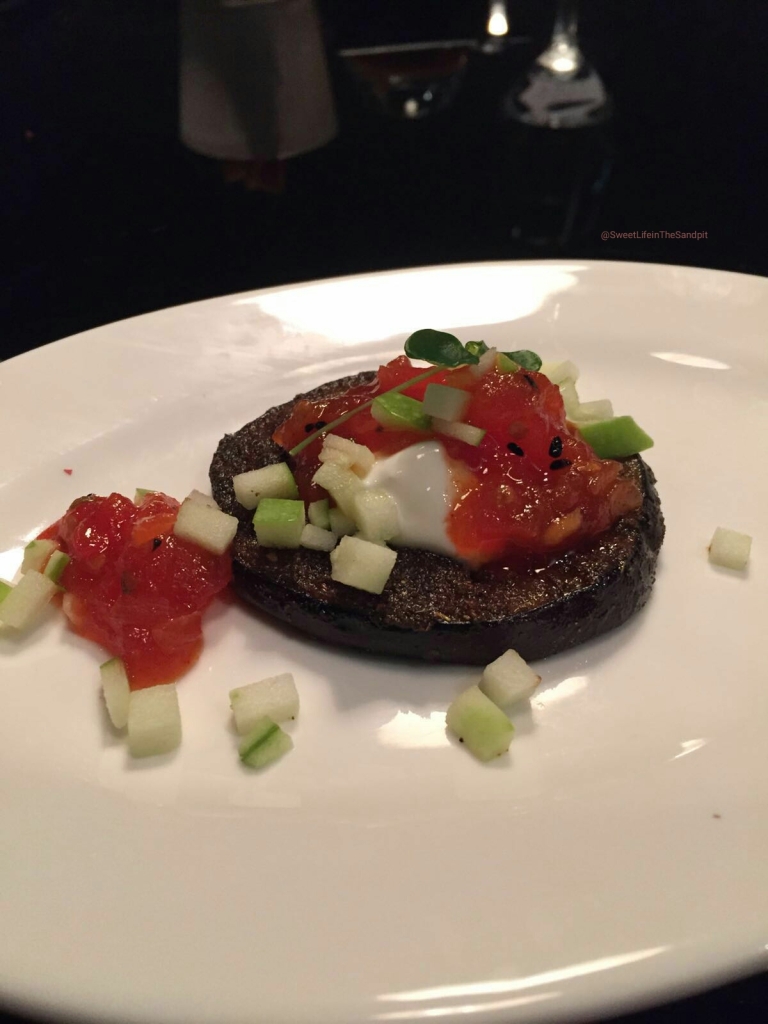 After that, the chef brought out a Haleem Kabab, which had a good amount of spice and loads of flavor.

Now, at this point I’m thinking that we’re just about ready to wrap up our lunch, when the chef comes out and announces that he has our soups and mains ready! All this time, my friend and I have been stuffing ourselves on starters. Also, by this point Khalifa has completely taken over the restaurant and is running all around, but the staff are so kind that they’re practically babysitting him while my friend and I feast on all of the things that the chef is preparing for us. 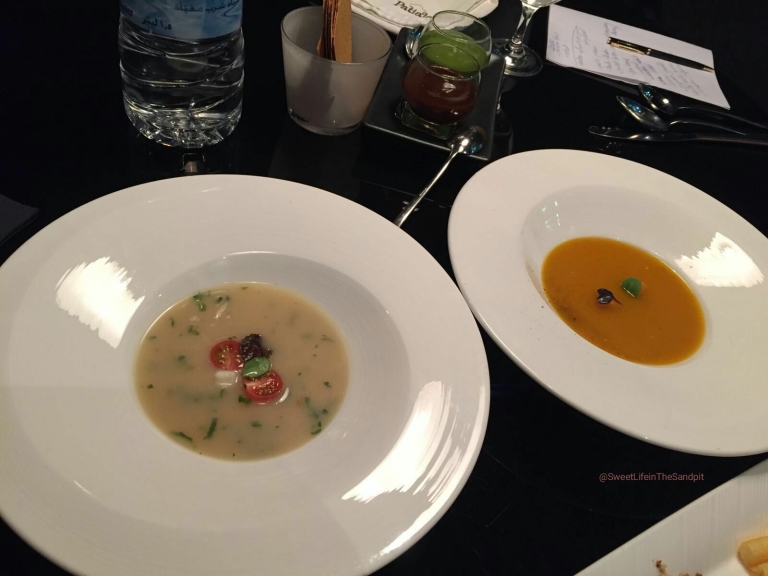 The chef beautifully presented the soups. One was a smooth Pumpkin and Apricot Soup, while the other was a Murgh Malai Shorba. Both were delicious, but I’ve never come across a pumpkin-anything that I didn’t like, so that one was definitely my favorite. It’s velvety and sweet, and the garam masala gave an Indian touch to this non-traditional soup. Even the way the soups were poured on to the bowls was artistic and beautiful.

All of the mains were brought out at once. The chef prepared four different curries, and four different kinds of naan bread! Chef Kunal is so generous and happy to feed people that even if my friend and I had brought our ever-eating hungry husbands along, I doubt we would have been able to finish all that was served to us. For the curries, we had Dhamka Murgh, Achari Ghosht, Dhal Makhani, and Palak Soya.

The lamb shank in the Achari Ghosht was falling off the bone with the slightest touch of a fork. It was beautiful, as were the other curries. My favorite though, was the Dhal Makhani– a must-try, especially for vegetarians!

The naans that were served to us were plain naan bread, bleu cheese and caramelized onion, wasabi parmesan, and zaatar and olive. The zaatar and olive naan is almost like a mana’eesh flavor, but what really impressed both me and my friend were the wasabi and parmesan, as well as the bleu cheese and caramelized onion. Who would have thought that these flavors would go so well with Indian food?! Chef Kunal is a culinary genius! You must try these two types of naan bread when you go the restaurant!

We were literally so stuffed, we couldn’t move. Thankfully, the waiters were still playing and chasing Khalifa around the restaurant so we could rest in our seats for a bit before we got up. Chef Kunal didn’t let us go that easily though– soon we were presented with two Indian desserts.

One was a Mango Lassi Ice Cream and the other was a Garbat Falooda. I know my husband would have downed that falooda if he was here, because he absolutely loves Indian desserts and falooda is one of his favorites. However, my friend and I both really enjoyed the ice cream because it was light and fruity and the perfect end to an incredibly huge meal!

Worth Trying?: Amazing authentic Indian food with a slight modern twist. Wonderful staff and a genius chef! It should definitely be on your list of restaurants to try.

One thought on “Patiala by Kunal Kapur[Restaurant Review]”