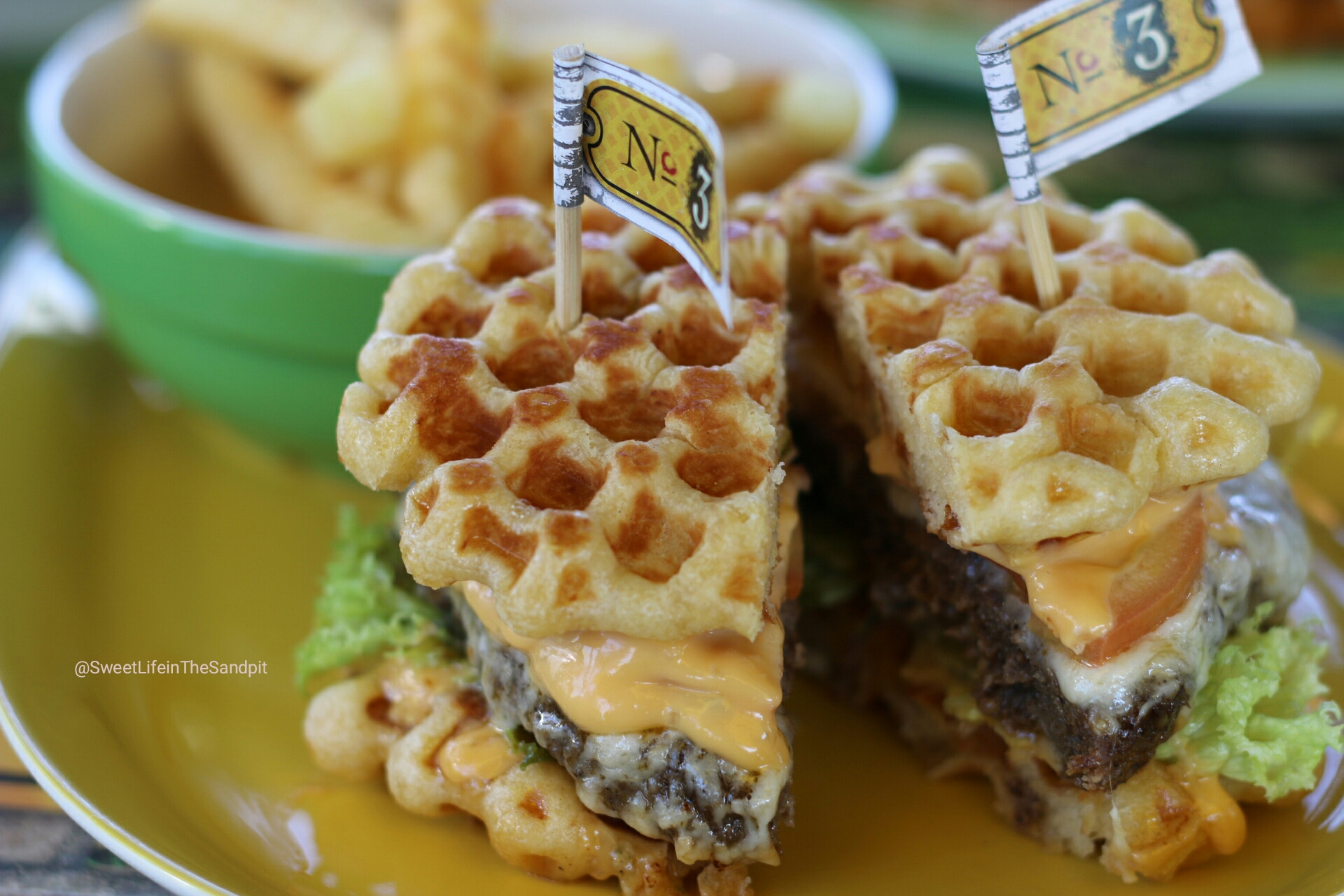 I love waffles! I could literally eat them every day and not get bored, so you can imagine my excitement when I heard that there’s a new waffle house in town. I headed over there with the hubby and baby last Saturday to check it out.

It’s located in Boxpark and if your not familiar with the area, it might be a little difficult to spot out. Just look out for it’s neighboring restaurant, Shish Fish which is a lot more visible.

We went during on of their more quieter times, so there were plenty of staff to serve us. There is indoor and outdoor seating, and although we initially sat indoors, we ended up moving to a table outside because my little Khalifa wanted to play in the kids area right in front of the restaurant. This little play area definitely makes the restaurant more family friendly because you can keep an eye on your little ones running around as you enjoy your food.

The waitress brought out the menu and we flipped through it not knowing what to order. Luckily she came back a second later with an iPad full of images of what the dishes look like, so it definitely made our choices easier. 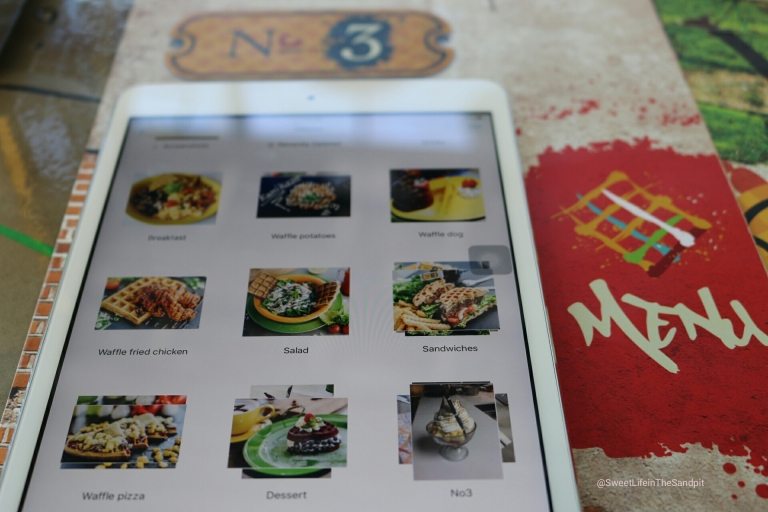 For drinks, my husband ordered a Avocado Shake and I got the Pina Colada. They also brought out a baby-sized strawberry milkshake which was perfect for Khalifa, and he loved it because he drank most of it in one go! 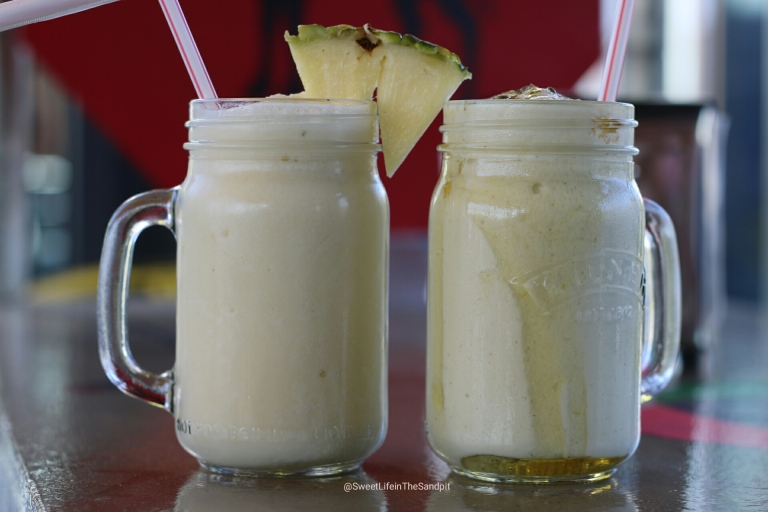 For mains, I had the Kamikaze, which I chose because it looked amazing on the images that the waitress showed us. It’s waffled potatoes with ground beef, kimchi, Japanese mayo and scallions. It did not disappoint! I thought it would be more of an appetizer type of dish, but its actually a full on meal. 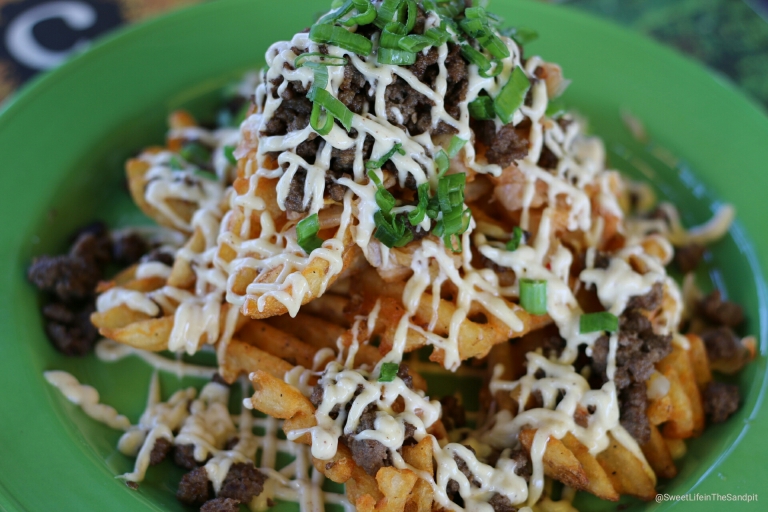 My husband made his own waffle combination, which consisted of waffles, Nutella and sliced bananas. The waitress however, suggested that he also try the Classic Cheeseburger, which was highly recommended. The brioche bread on the burger is waffled and it comes with a side of french fries. He liked it a lot but its definitely a hefty meal and he could only finish half it. The meat on the burger is really good quality.

I wanted to get a small dish for Khalifa, so I opted for the 2-piece Chicken and Waffles, which I thought would be quite small, but it was almost a bigger meal than what I had! They are so generous with their portions. Along with the 2 chicken strips, there were 4 waffles and potato waffles. Had I known there would be so much, I would definitely have told them to make it a smaller portion, but Khalifa got to enjoy it twice– once at the restaurant and once again on the way home in a take-away box.

For dessert, my husband had his waffle that he ordered earlier, while I was recommended to try the Brownie Surprise. My husband’s waffle was a delicious looking Belgian waffle drizzled with a classic combination of Nutella and bananas. 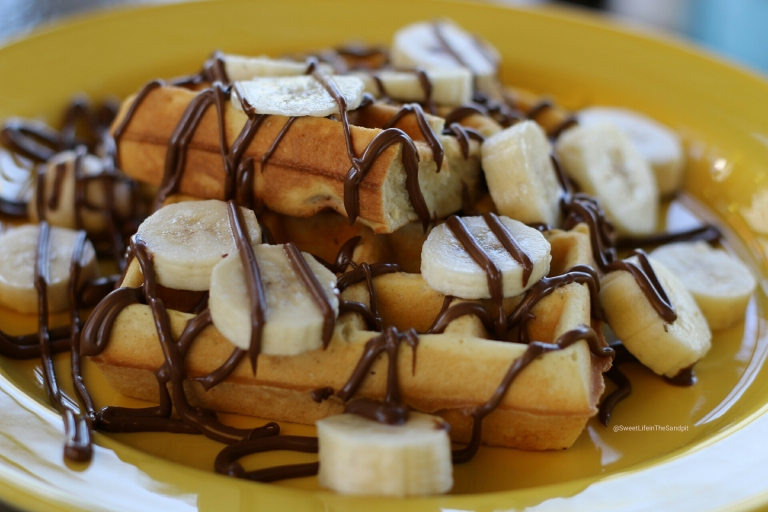 My Brownie Surprise was such an incredible and delectable dessert. 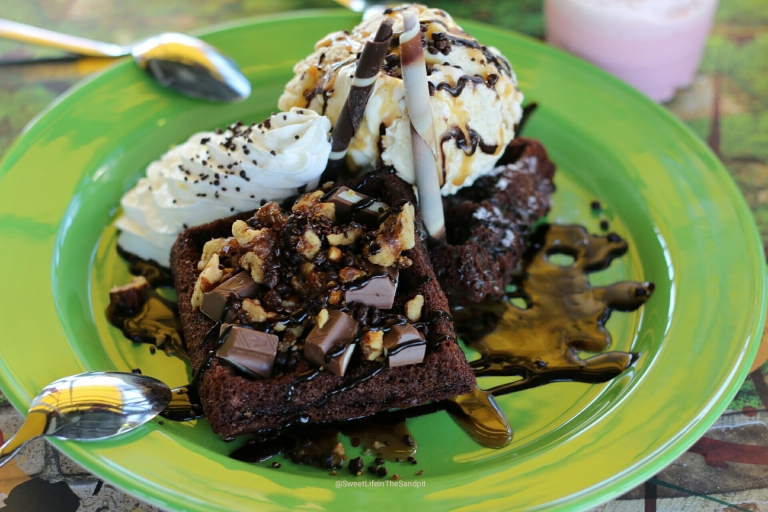 The base of the dessert is two chocolate cake waffles, topped with Kinder chocolates, dark chocolate drizzle, crushed walnuts, and to save you from death by chocolate, there was a generous scoop of ice cream and whipped cream. What’s the “surprise”? There’s chocolate pop rocks that crackle in your mouth! This dessert is heavy and definitely meant to have on a major cheat day.

Worth Trying?: Like I said before, I love waffles, so I would be happy to come back at any time, but even if your not a big fan of the traditional waffle, there are so many variations on the “waffle”, so its a great place for people who aren’t big fans of it. Also, even though there’s no kids menu, its still such a family friendly place, especially since there’s an open kids play area right in front of the restaurant.