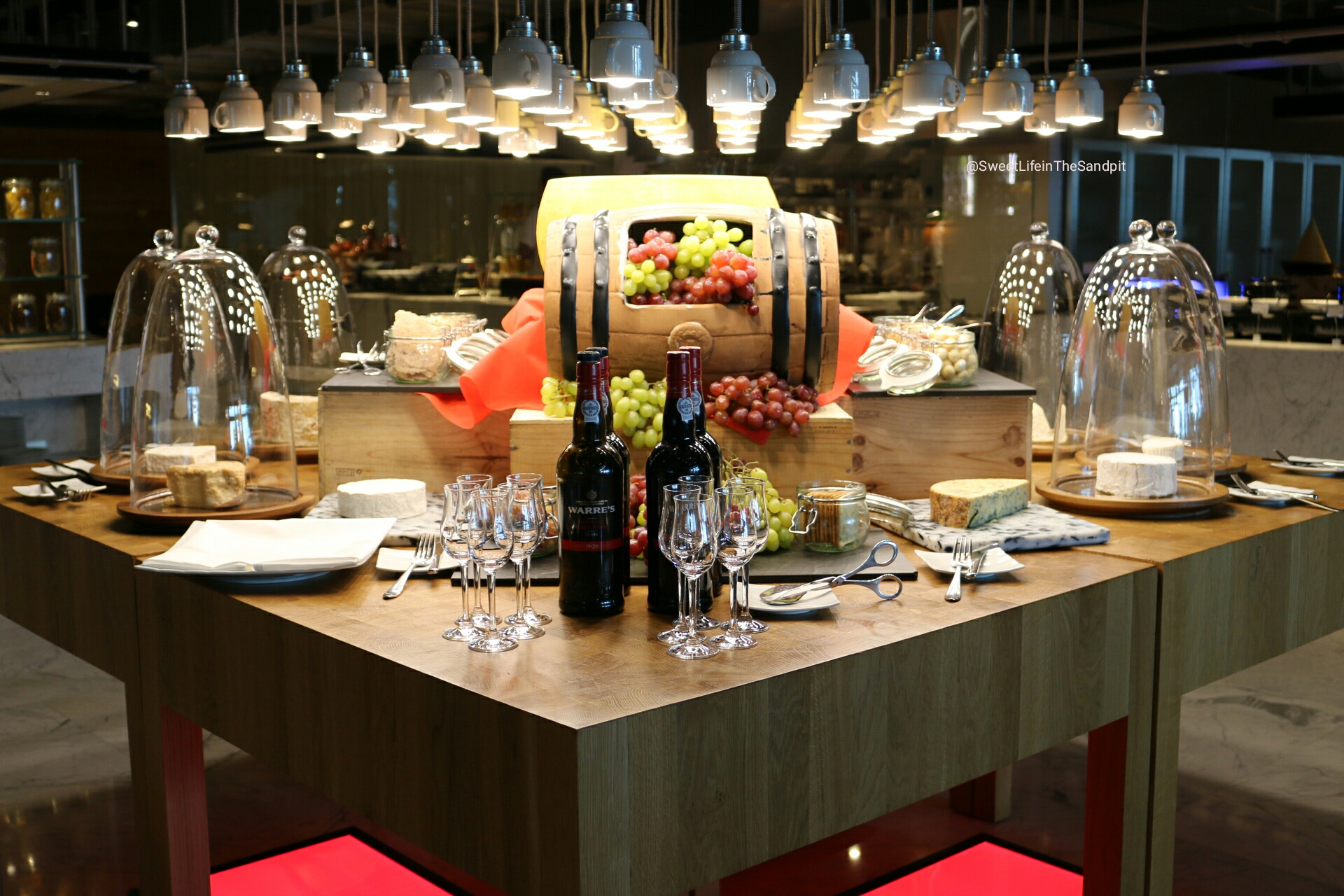 ‘Where to go for Friday brunch’ is such a common topic in Dubai. We’ve been to so many brunches in this city, and I have to say, the food served at Feast’s Friday Brunch at Sheraton Grand on Sheikh Zayed Road is one of the best in both quality and quantity.

We’ve stayed at the hotel before, about a year ago and during that time, have also been down to their restaurant, Feast, for breakfast. I remember that breakfast was spread across many different stations and it was almost a brunch in itself, but it was nothing compared to what we experienced last weekend. 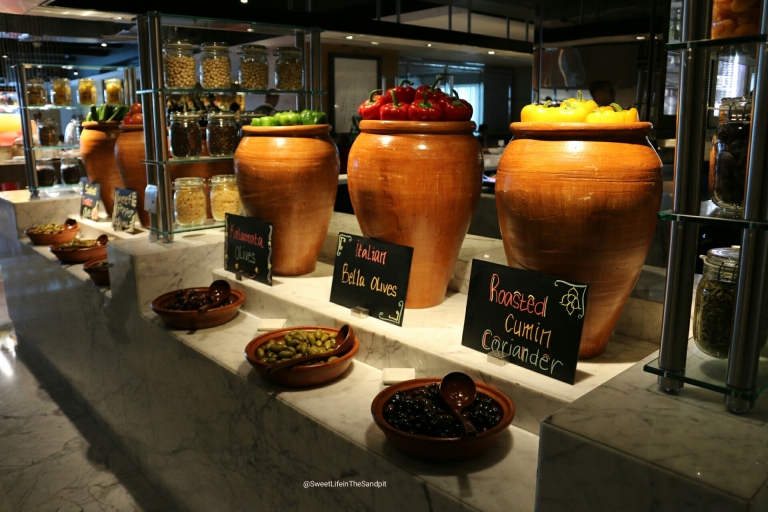 Last weekend, my friend and I headed down to Feast for their Friday Brunch. We had reservations ready, so although we had gotten there a bit late, (after Friday prayer), we still had a table ready and waiting for us. We were taken to our seat, and asked what kind of drinks we wanted. I immediately ordered a watermelon juice for my 1-year old Khalifa who was also with us, and other fresh juices for my friend and I. After ordering the drinks, I walked around to take some pictures as usual, and a friendly chef came up to me and jokingly asked if I was filming a movie, haha. He introduced himself, and then he introduced me to his colleague Chef Raymond, who handles the ins-and-outs of all that goes on at Feast. Chef Raymond showed both us all around the buffet, and explained all of the different kinds of foods that they have.

When we first walked in, we took a quick look around, but after our little tour with Chef Raymond, we realized that there were so many stations that we would have easily skipped and passed up on if it wasn’t for him.

The first station that we went to was the starters. There were so many different kinds of starters, from freshly-made salads, to gazpachos, oysters, Arabic starters like stuffed vine leaves and mouttabel, and even creative in-house specials. 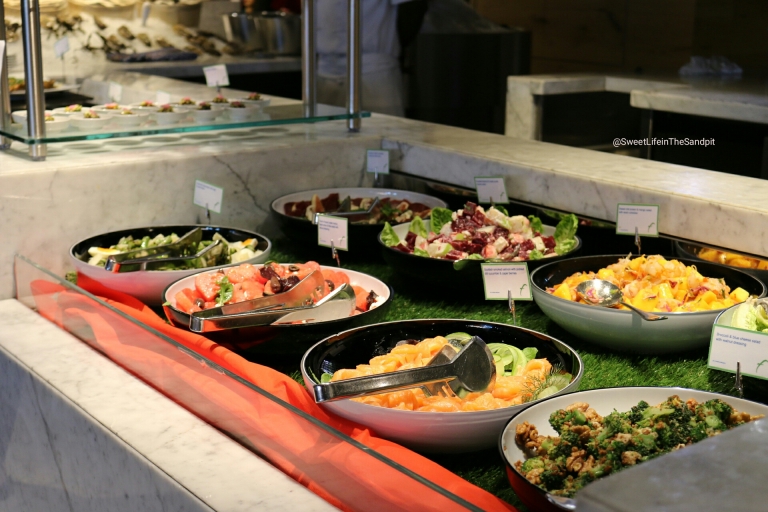 After that, we went across to a station just for mussels. It might sound kind of odd as to why there was a station just for mussels, but let me explain how it works– there are about 5 different kinds of preparations for the mussels and a chef makes it to order, with whatever flavors that you want. We’ve never seen something like this at any other brunch, so we had to give it a try; my friend got the Japanese miso one, while I tried the Thai-inspired one. 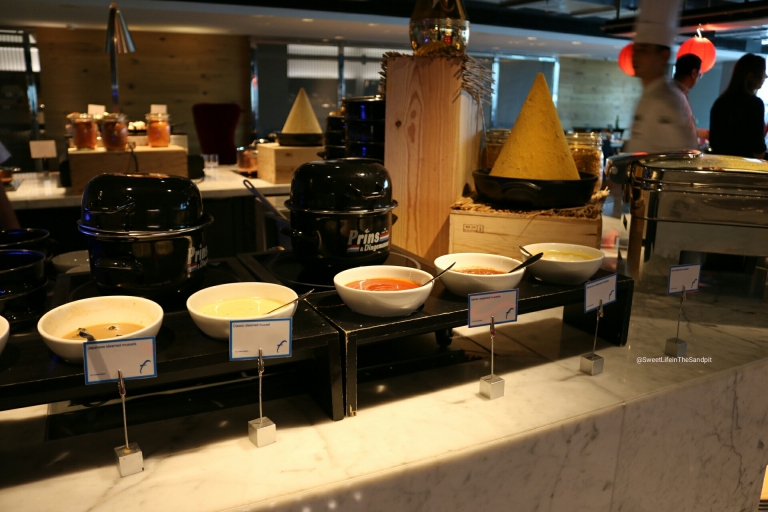 On the other side of the mussel station, there was another station that had Arabic, Middle Eastern and Indian dishes. Along with your typical rice dishes, there were also a few things that are not as commonly found, like moussaka. One dish that really caught my attention here was a seafood Um Ali! I know it sounds really weird, but this is a must-try at this brunch! It’s so unique; it has some elements of Um Ali, like the flakiness of the pastry and the cashews and raisins, but its a savory fish dish. Just writing about it has me yearning to get the recipe. Chef Raymond: if your reading this, then help a girl out!

Across from that area is an Asian station, and its definitely not your average Friday Brunch ‘basic’ Asian station. It encompasses so many different Asian cuisines; from Thai, Japanese, Malaysian, Chinese and Korean. We were on vacation in Malaysia a few months back and I have to say, the Beef Rendang here at Feast was even better than the ones that we had in its native country. YUM!

On the other side of the Asian station is a bar area. I don’t drink, but I must say, they had so many creative pairings that go with their drinks. There was an area dedicated just for a mojitos and they can even prepare virgin mojitos. We ordered two of those, and they got sent straight to our table.

Next to that is a bread table that has so many varieties of bread! There were herbed breads, cheesy breads, focaccias, different kinds of breadsticks, dipping sauces and specially-made butters. This is where you diet comes to die. Normally, I don’t like filling up on bread at brunches, but these ones looked so appetizing and creative that I had to try some of them. There is also a bread platter that is served at the table, accompanied with a cheese fondue and other dips and butters.

Across from the breads is a table dedicated to wine, grapes and cheeses. You can sample many different kinds of cheese and wines.

Towards the front of the restaurant, there is a Western mains area for things like Beef Wellington, baked herb-crusted salmon, potatoes au-gratin, Yorkshire pudding, freshly-made pastas and also a grill area for meats and seafood like steak and lobster.

After picking a few things from here, we headed to our table to do righteousness to the the restaurant’s name: FEAST!

Our mussels and mojitos were delivered to our table, and then Chef Raymond passed by to see if we wanted to try any other of his specialties. Soon after, he sent steamed bun sandwiches and a plate of scrumptious Pad Thai to the table. Our eyes were definitely bigger than our stomachs because our table was filled to the corners with platters of food! 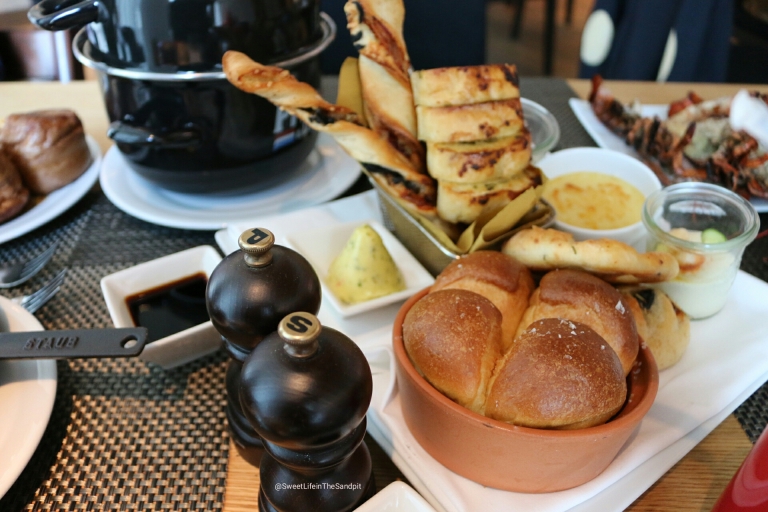 We took our time enjoying and trying as much as we could, and saw that the tables surrounding us were emptying out. We checked the time and realized that the brunch was over 15 minutes ago, but the staff were so kind that they never even rushed us or informed us that we had to leave. They even encouraged us to take our time and make sure to leave room for dessert. 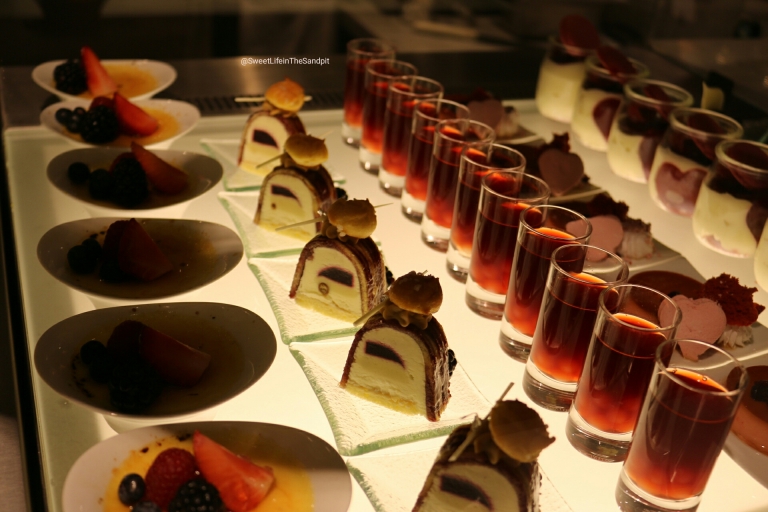 Although we were so full, we did leave a little room for dessert. The large spread of dessert had all kinds of cakes, cheesecakes, mousses, tarts, pavlovas, custards, chocolates, candies, marshmallows and even cake pops. As much as my sweet tooth would have loved to try more than just a couple, I was so stuffed from the food and couldn’t try a morsel more. It really was one of the best dessert tables at a Friday Brunch.

The whole brunch was actually really impressive, and I would be more than happy to be back. Next time, though, I’ll have to make sure to get there right when it begins so that we can make the absolute most of it (not that we didn’t this time). The price of the brunch is a little bit on the higher end, but its definitely justifiable. It was such great food and great service, and I have to say the quality of all of the food presented at the brunch was impeccable!

The Friday Brunch at Feast Restaurant, Sheraton Grand Dubai starts at 395 Dhs for non-alcoholic beverages, 495 Dhs for house beverages, and 595 Dhs for Moet and Chandon.

Worth Trying?: YES! One of the best quality food brunches in Dubai!