Although located in the iconic Raffles Hotel building, La Residence is quite new to the Dubai dining scene. My husband and I went there last Friday with our little Khalifa in tow. Since its right next to the hotel, valet parking is conveniently provided on a complementary basis, and so after we gave the car keys to the valet attendant, we headed to the restaurant.

When we walked in, we were quickly escorted to our table and given the menu. At first glance, it seemed like a very short menu and we were a little taken back as to how limited it was, but then the waiter told us that we had actually come just in time for their seafood night. The menu handed to us was a set menu, and all of the items on it would come to the table.

Soon after being told all about their seafood night, the waiter left to bring us the first of many dishes that would flow onto our table. During this, we had a moment to look around the restaurant and it truly is a beautiful space. The decor is very classic 50’s style, with hues of maroon and leather tufted seating. The venue is actually very large and perfect for events like birthday parties– we were even told that they have live singers and exclusive concerts held there. However, the night that we were there was more on the quiet side, which was just fine for us because Khalifa was able to sleep straight through the dinner, and thats something that rarely happens.

We were  given a choice between three mocktails; I decided to get the Passion Punch while my husband got the Bouquet D’Agrumes. Both of the drinks were really good!

The first thing that came to our table was an amuse-bouche of caviar. Along with that came a bread basket with several different kinds of breads. My favorite was a savory profiterole-like bread that had a creamy parmesan butter on the inside and was just the perfect bite-size ball of puffy bread on the outside. 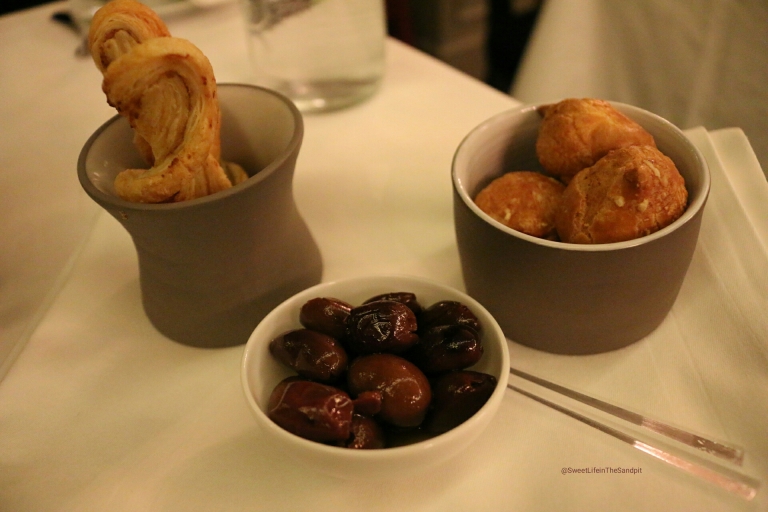 The first of the starters that came was fresh oysters beautifully served on a platter of ice. Everyone has an opinion on oysters– its either a love or hate kind of thing. Unfortunately neither my husband nor I are big fans, so we passed up on it, and were quickly given our second starter which was a beef carpaccio with burrata.

I noticed that this wasn’t on the menu, and that several of the things that we were served that evening differed from the set menu. Nonetheless, the burrata was incredibly smooth and delicious and a highlight of the night.

After that, a shellfish soup was served. The base of the soup was delicious and they were very generous with the mussels and clams, but it didn’t contain any other kind of shellfish. I think a few shrimps and a bit more broth would have really enhanced the dish. We used bread from the bread basket to scoop up the delicious broth and it was a great combination.

On the set menu, there were two more dishes that were supposed to be served as appetizers, but sadly never came to our table. Regardless, we were ready for our mains, and we were first presented with a Mediterranean-style Hammour dish. The dish is comprised of a small Hammour filet, enveloped in a rich tomato-based sauce that has olives and capers.

My husband was the hungrier one out of the two of us, so he finished that pretty quickly, while I had the other main that was presented to us, the Sardinian Seafood Fregula. I loved the fregula dish, and the flavors were really good. Along with the fregula came mussels, clams and a few shrimps. 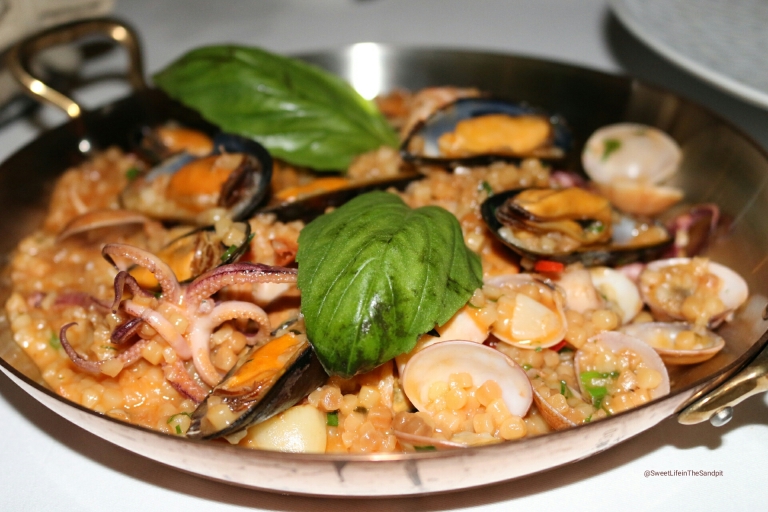 Again, there was supposed to be one more dish served as a main, but it was never brought out to us. I think that the experience would have been much better if all of the dishes that were on the menu were presented to us; firstly because only one of each dish on the menu is brought to the table (instead of one per person) so it’s not as filling, and secondly because some of the things mentioned on the menu seemed like things that we would have really enjoyed, but never got the chance to try them.

Dessert soon followed and it was a treat. First came chocolate profiteroles, which I was expecting to be traditional profiteroles with chocolate sauce, but was pleasantly surprised with a not-so common large profiterole completely made of chocolate with a whipped cream filling. I really liked that dessert and would happily go back for it.

There was also a beautiful warm Apple Tart that was served. It was wasn’t mentioned on the menu, but was given to us anyway. It was really scrumptious and had a bit of caramel drizzle and a scoop of vanilla bean ice cream.

Also served was a fresh fruit platter on a bed of crushed ice, along with sorbets. The presentation was simple and beautiful.

Now, since when we found out that we were here during a seafood night, we were excited because both my husband and I love seafood. Unfortunately pretty much all of the seafood dishes that were served were made up of mainly mussels, clams or oysters and we’re not big fans of that. I think that if there were different kinds of fish, calamari, prawns or lobsters, it would really appeal to us (and I think others as well) a lot more. However, if you love mussels and clams, this would be a great place to have it at.

We’ll definitely be back to try out their a la carte menu sometime soon, as I’ve heard really good things about it. Also, we were very happy with the service and always felt like we were well-taken care of. They also hold a lot of events and even have a great Ladies Night here, so thats also a must try!

Worth Trying?: We went here on the Seafood Night, so I can only comment on the food at that time– its a must try if you like shellfish (mussels and clams)!  The desserts here are so delicious and I would come back just for them!