I’m going to be an aunt soon because my closest, dearest friend (who is very much like a sister to me), is going to be having a beautiful baby boy! Us Americans are BIG on baby showers, which is a celebration of the mom-to-be as well as the new baby to come. My lovely friend hosted both of my baby showers and I knew that I wanted go ALL OUT for hers.

I knew which venue I wanted to host her baby shower in even before she got pregnant (I like to plan ahead, haha). Some Shakespeare & Co. restaurants have private rooms for parties and they are perfect for gatherings like baby showers, bridal showers, etc. When the early planning stages kicked off, I went to see the private party area at their Arabian Ranches location. Everything looked perfect but when I spoke with the Shakespeare & Co. catering team’s manager, Leizl, she highly recommended the space at the DIFC branch since it would be bigger. 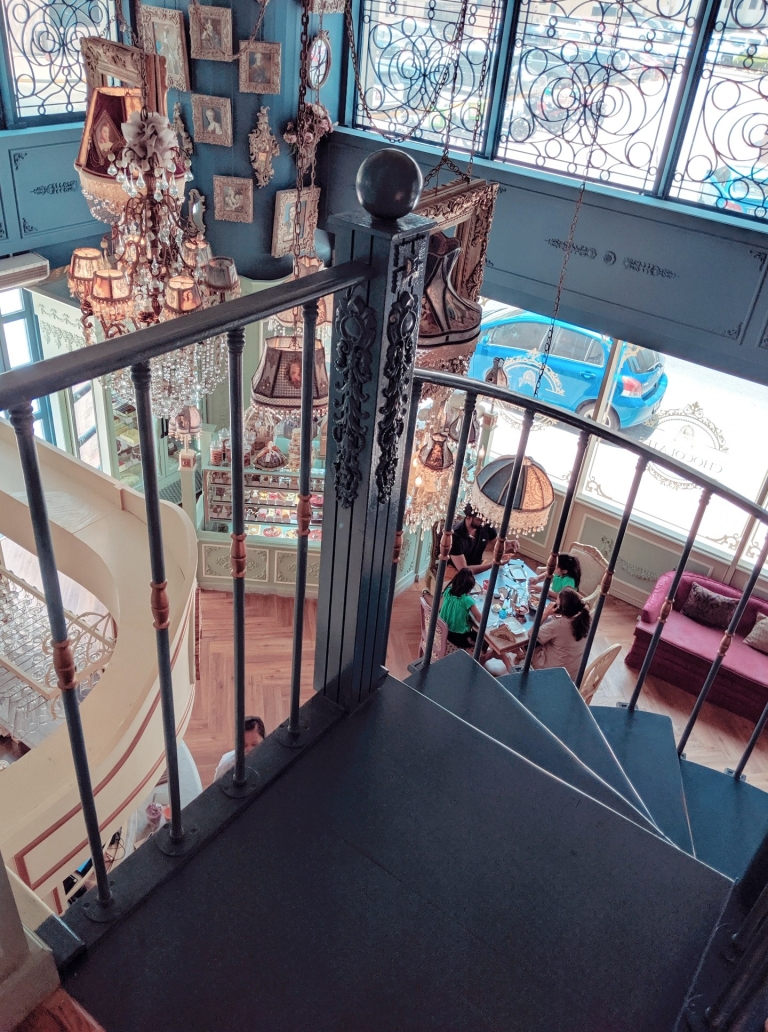 With 20 ladies on the guest list, the DIFC location was definitely better suited to accommodate all of us, as well as have extra space for the buffets, a mocktails/coffee area, the gifts table and the games. Its also very private (even more so than the Arabian Ranches location)! Most people don’t even know that the Shakespeare in DIFC has an upstairs seating area. Once I saw this new location, I knew it would be perfect and locked down the date.

Before I get into how the planning stages went, let me tell you this: they are the best caterers I’ve EVER worked with and trust me, I host A LOT of events– both personal and work-related. The catering team at Shakespeare & Co. put so much thought, effort and love into what they do. I knew that everything would be flawless even before we got started.

My friend really wanted fox/woodland animal-themed decor for the baby shower, but also wanted to make sure that it was blue and very boy-ish, so the colors and theme were set from the beginning. 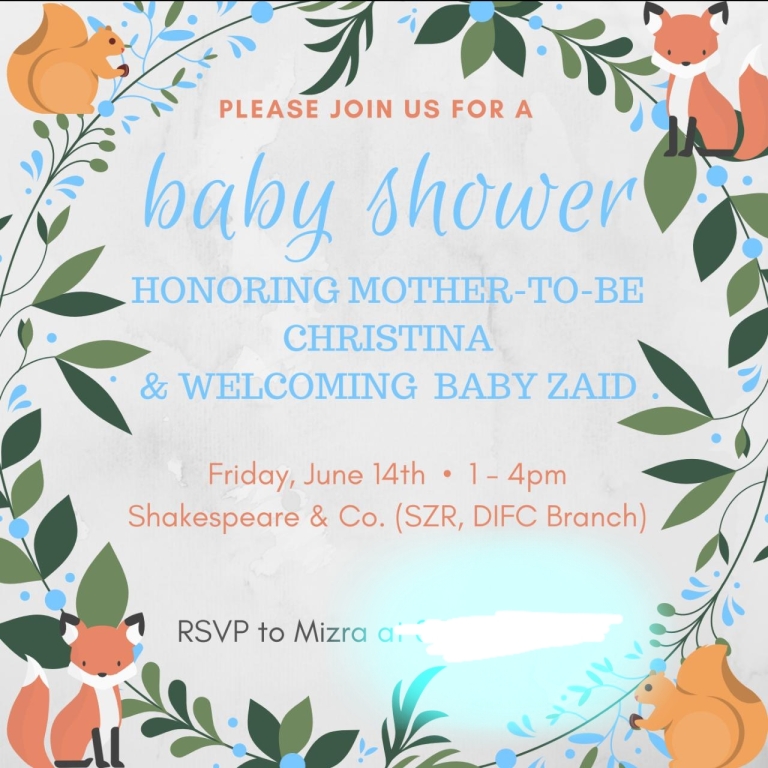 I was in touch with Leizl and Ricci from the catering team via email for the most part. About a month away from the date of the event, I thought it would be nice to meet at the location with them and go over all of the details. They were so kind and completely open to my early morning 8am meeting on a Sunday!

We went through all of the details of the set up. I’m very particular about the way I like things set up and they were so flexible and able to run with the ideas that I had (unlike most caterers/event managers who can be very rigid in the way they work). They came up with marvelously creative ideas that were perfectly in line with my ideas and requirements.

Set-up on the Day:

On the morning of the event (which was a Friday morning) both Leizl and Ricci along with the rest of the catering team were at the venue bright and energized from 9am in the morning– what a dedicated team! I didn’t get there until 10.30am, and they were already half way done with set up by the time I got there. They work FAST!

When I came in, I really saw how much thought and passion that they put into everything that they do; they made themed decorative items and that was a total surprise to me; I had no idea they would be including this in the catering service! They actually had specially-made wooden animal cut out boards to place around the buffet. It was so adorable!

They also made a gorgeous easel which was completely in-line with the design of the baby shower invitation card. In addition to that sign, they also made smaller signs for the gifts table, sweets table, etc. It was so adorable and I loved that they thought about those small touches when I didn’t even mention anything about that to them! There was also a HUGE sign that looks like baby blocks and spells out B-A-B-Y. Seriously guys, best catering team EVER! Leizl is a visionary! 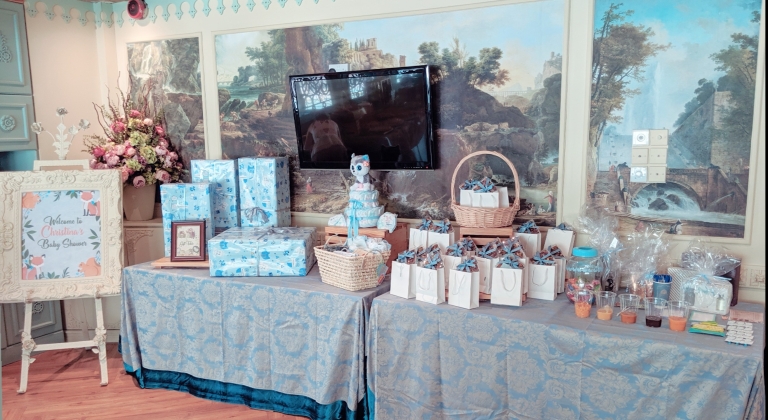 During that initial meeting, I completely forgot that I needed a small table for the guest book and mommy advice cards! At the last minute during set-up, they went out of their way to find the perfect-sized table to fit the entrance area for the guest book! The entire team was always so kind with every last minute thing thrown their way, even with all the chaos going on. They work so well and so creatively under pressure and on a time limit, its refreshing!

In addition to the lovely decorations that Shakespeare & Co. put together, I also brought some decorations that I’ve accumulated over the past few months. Pretty much everything I got was from Party Centre, and one of the main decorations was this gorgeous balloon arch — also from Party Centre! The balloon artist got there before I was there and the Shakespeare & Co. team let him get straight to work without any hassle at all. I didn’t have to fill out any paperwork or permits, which made everything super easy. 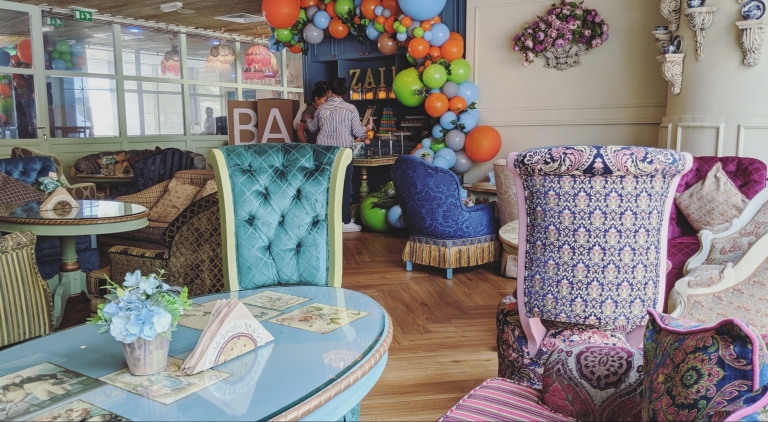 Even with all of the setting up that they had to do, the team still helped me with my little additions like placing the extra freestanding balloons in the right places, spreading out the small table decor and confetti, finishing off the party favor bags with Shakespeare & Co. chocolates and preparing the games table.

Set up was done perfectly on time and not a minute later than 12.30pm, as guests were due to arrive at 1pm.

I wanted it to be a very afternoon tea-style menu.  Leizl and Ricci suggested different finger foods, sandwiches, desserts and salads. We tweaked the menu several times before getting it perfect; I just wanted to make sure that there was something for everyone. 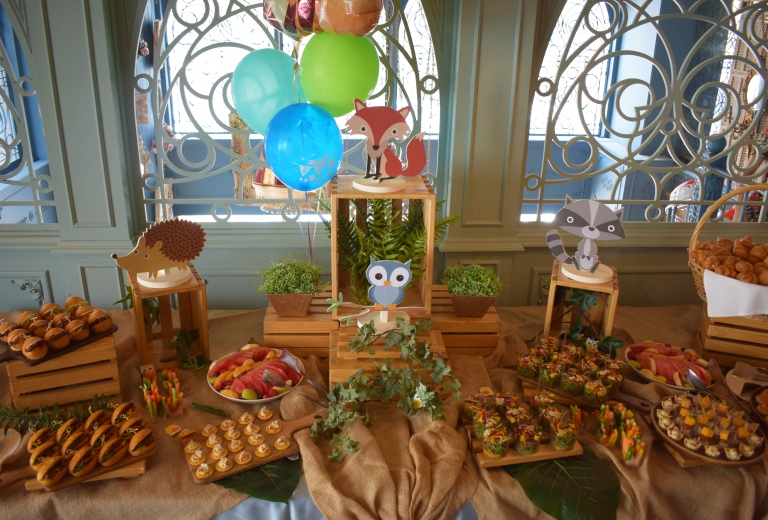 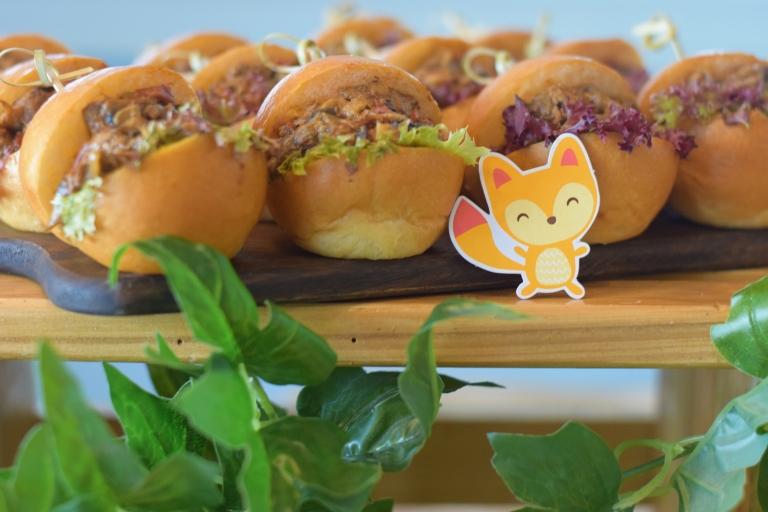 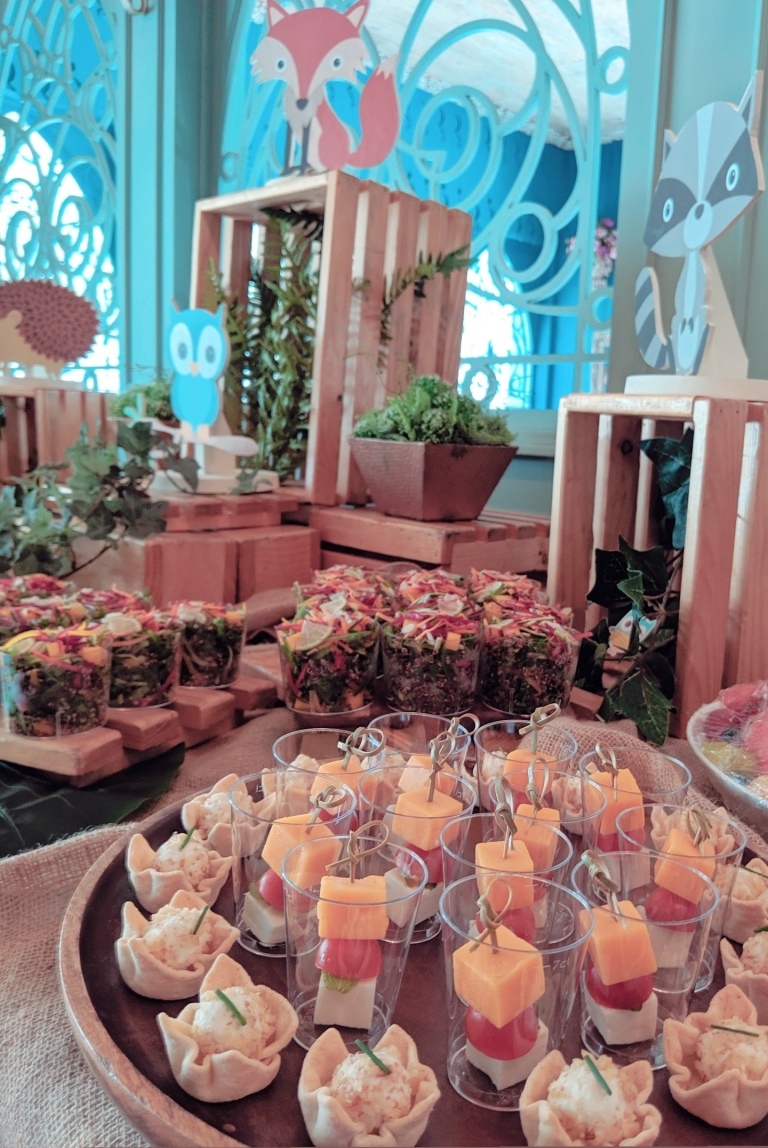 In addition to the food, we also had a beautiful cake. When I saw it in person, it was even better than the picture that they showed me prior to the event! It was HUGE, much larger than what I expected for 20 people, and it looked stunning.

Every guest that walked in was so impressed by the layout, the decor, the delicious food and the flawless service of the staff at Shakespeare & Co. In case you’re not privy to what happens at a typical American-style baby shower, its a lot of chit chat, baby-themed games and presents. I prepared 8 games with prizes and had a full timeline of when each game was to be played. Everything went perfectly according to the timeline and was smooth as can be! 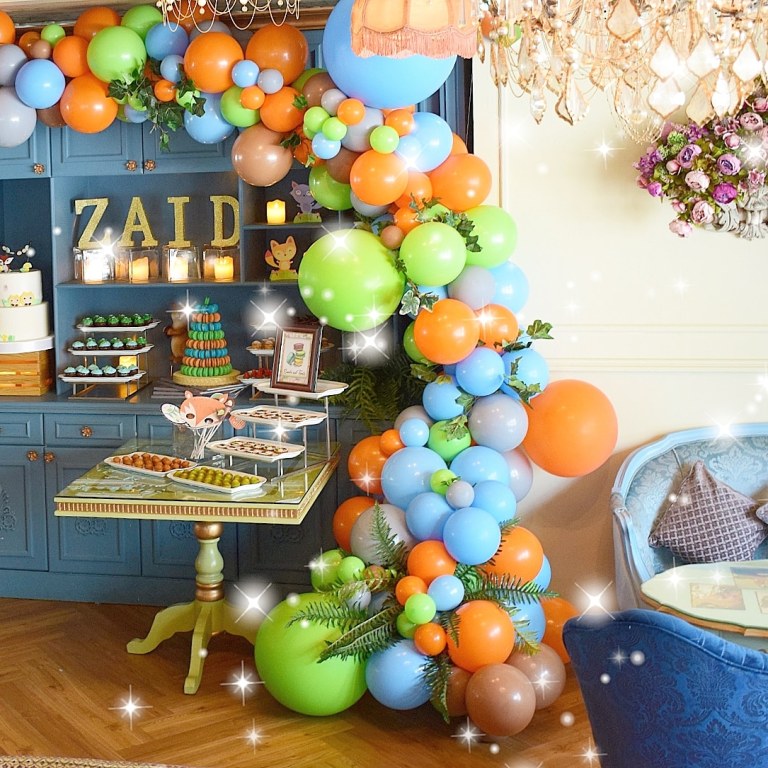 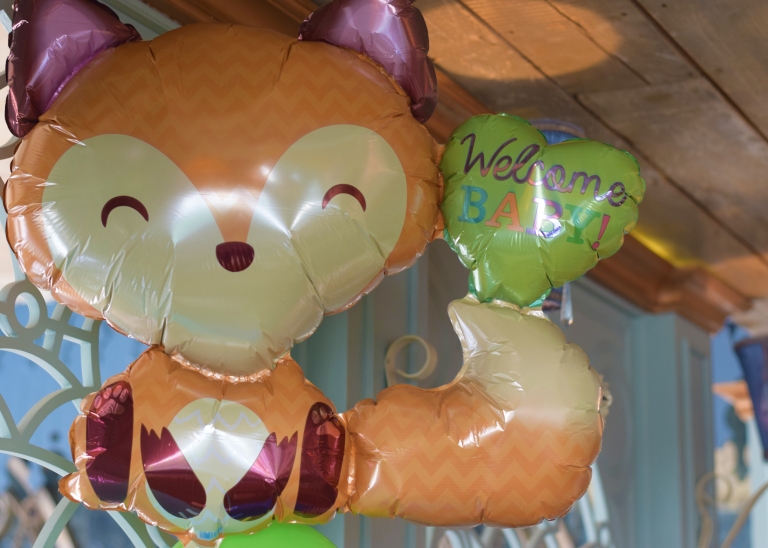 All of our guests absolutely loved it and were amazed that Shakespeare & Co. did events like this! I even got so many DMs via Instagram asking if it was directly through the restaurant, if I got an events company to do it, etc.

Most importantly, my amazing friend said that it was THE BEST BABY SHOWER she has ever been to (and that she’s not biased because its her own), which makes it all the more sweet.

I was SO beyond happy with the way it turned out and I wouldn’t change anything at all. No other caterer could possibly even match up to how much love and effort Shakespeare & Co.’s catering puts in, and because of them, it really was the best baby shower ever!

If you’re looking for a caterer (and possibly also venue) for ANY KIND OF PARTY (not just a baby shower), Shakespeare & Co. should definitely be your first (and only) call! To contact them, you can email catering@shakespeareandco.ae or call +971 4 329 1040.