Serafina is a beautiful Italian restaurant located in Souk Al Bahr, right across from Dubai Mall and right in front of the Dubai Fountains. We had a reservation there for 2.30pm, but due to an immense amount of traffic, and since we were coming from Abu Dhabi that day, we were extremely late! We ended up getting there around 6pm, and thankfully we made it right before the restaurant got completely filled up. Note to self: leave extra early if your heading out on the Abu Dhabi-Dubai Road on a Thursday at anytime past 2pm! 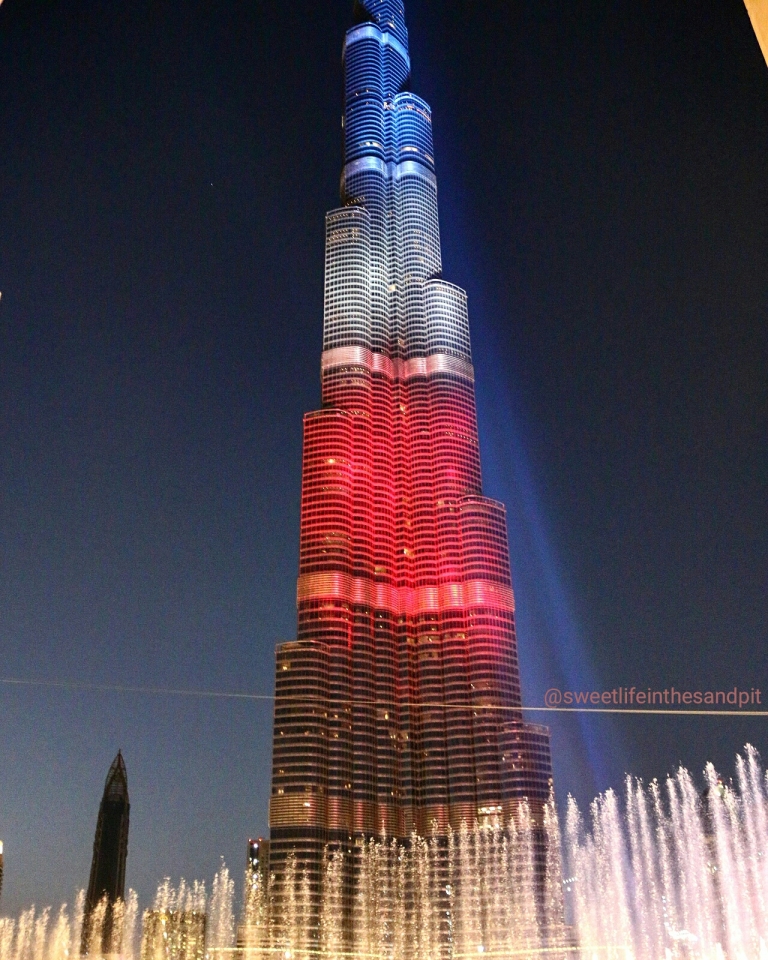 Now, the staff at Serafina were incredibly understanding and welcoming, even though we were late. They took us to our seat, which had the most incredible view of the fountains and Burj Khalifa. They quickly seated me, my husband and my cousin who was visiting Dubai that weekend, and they brought out a baby chair for little Khalifa. We came just in time for the fountain show, which began soon after we were seated. The best thing about this location is that it’s on the Souk Al Bahr side, which means it’s not as packed as the Dubai Mall side and you have a nice, calm and clear view of the fountain show.

Serafina has several different seating sections,  both indoor and outdoor, but we were seated in a place with the best view– by the fountains! 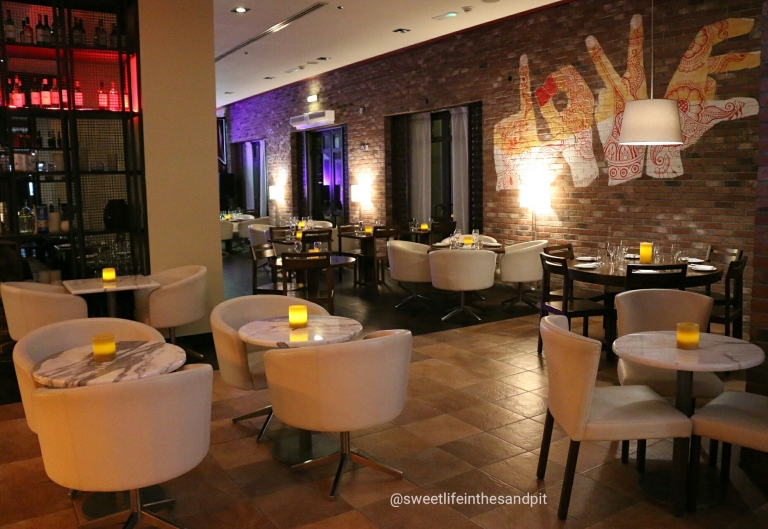 They brought out the menu along with a bread basket, as well as a few different dips, olive oil and balsamic vinegar. We took a quick look at the menu and tried out a little bit of everything! 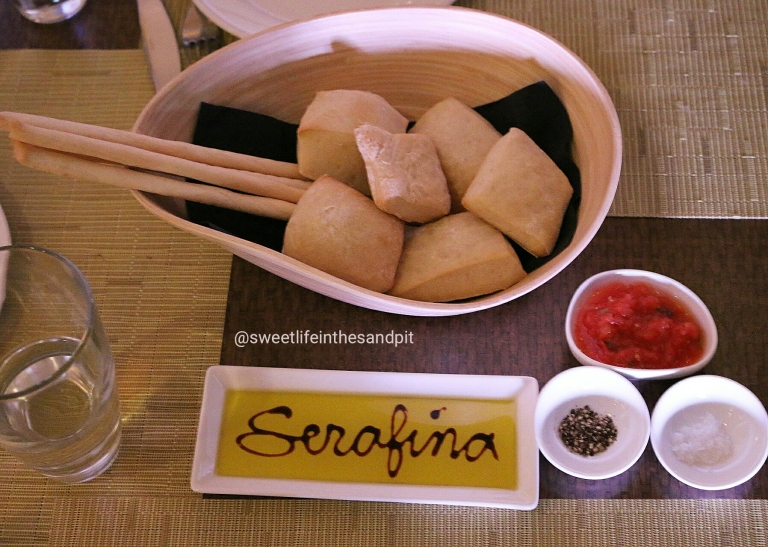 On our taster platter were several different appetizers. We had a delicious freshly made Bruscetta, which had all the right notes of classic Italian flavors. We also tried their delicious Calamari that was served with their house-made marinara sauce.Then we tried their delicious Carn Salada which is very thinly sliced marinated beef that comes with arugula leaves and parmesan slivers. My favorite of all of the appetizers though, has to be the Rotolini Di Caprino, which as creamy goat cheese rolled in thinly sliced zucchini and served with toasted almond. 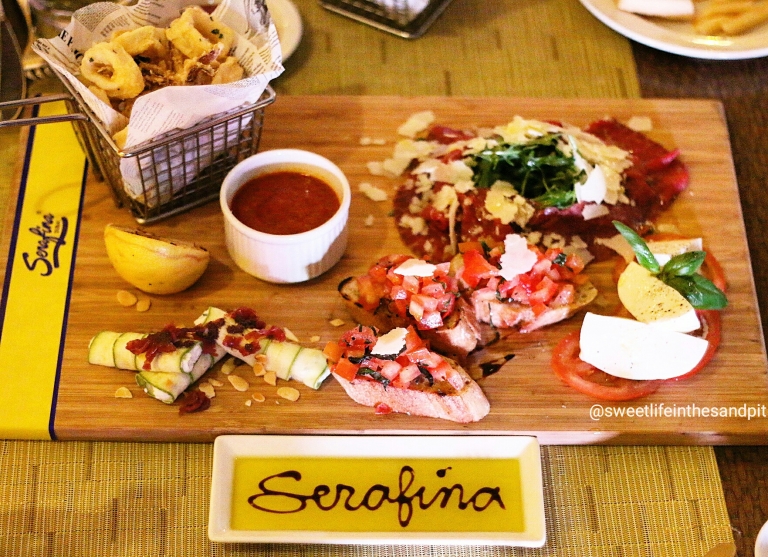 By the time we were done with the appetizers, the restaurant was getting quite packed. I would highly recommend you book a table before coming, especially on the weekends. The manager, Dominic (who, by the way, is incredibly friendly and welcoming), also informed that they are soon going to take reservations for New Years Eve, as this is really one of the best locations to view the fireworks from. I highly suggest you make your bookings soon because I’m sure once they open the bookings, it will fill up quite fast!

For mains, we also had a sharing plater style dinner, and had a little taste of everything. We had Ravioli all Parmigiana, Ravioli all Salvia, Gnocchi di Mama, Filetto di Salmone. 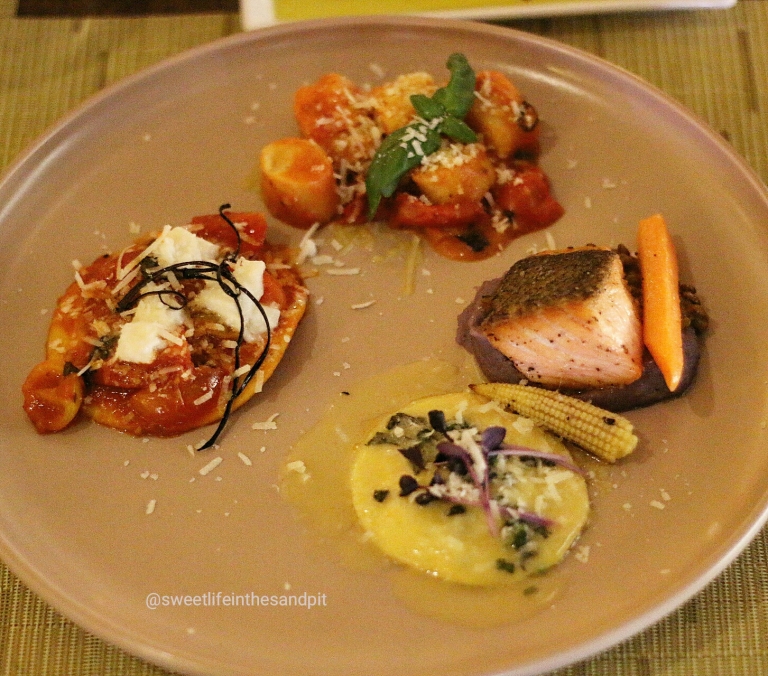 All of them were so delicious, but my absolute favorite was the gnocchi. It was so soft and you can really taste that it was freshly made with loads of love and care. I would come back to the restaurant just for this! My husband really liked the salmon, which was perfectly cooked and laid on a bed of purple potato and lentils.

For dessert, we had three of their most popular treats. First was the Tiramisu, which is an all-time, go-t0 Italian dessert for me that I love to make at home, so I’m very picky about the taste and texture of the tiramisu that I try at restaurants. The one served at Serafina was so on point. It’s so creamy and has such a great melt-in-your-mouth texture. The flavor of coffee is perfect– not overpowering, yet still prominent. You have to try out their tiramisu!

Along with the Tiramisu, we also had The Garden, which is beautifully presented on a black slate plate, and looks just like the name suggests– a garden. Everything on the plate is edible, even the flower pot! The flavors of this dessert are very fruity, but its also got a strong chocolate taste, which comes from the cleverly made flower pot. 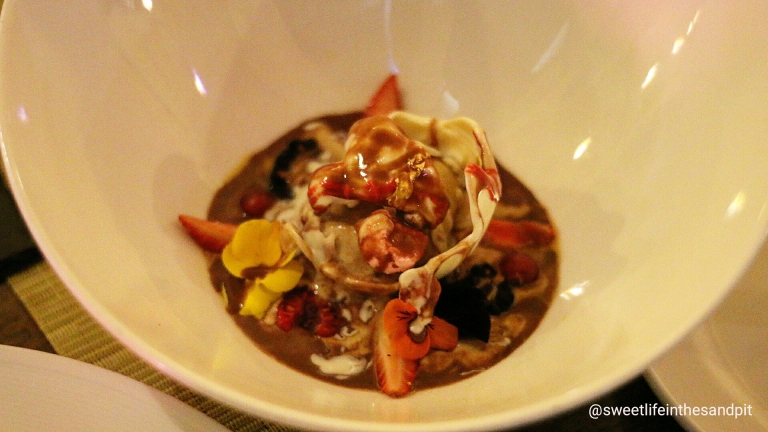 For the third dessert (hey, there were 3 of us, so a third dessert is totally justified– don’t judge), we tried the Moon Explosion, which is again, another incredibly presented dish. Its a ball of white chocolate with a surprise inside. The “explosion” is created when they bring it to the table and pour warmed chocolate over it and it implodes, exposing the ice cream and marshmallows inside. Its a fun treat and although the presentation is very sophisticated, the taste is reminiscent of your best childhood memories. Yummy!

We were very happy with our experience at Serafina, and would gladly come back. We learned that they have several different themed nights; Comedy on Sunday,  Jazz Night on Mondays, Ladies Night on Wednesdays. They also have Friday and Saturday brunch! Almost every night and day is different, so you won’t get bored even if you come several times a week!

There was an error retrieving images from Instagram. An attempt will be remade in a few minutes.